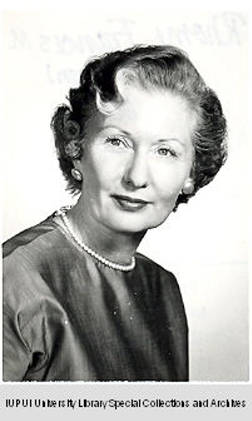 Frances Rhome served as IUPUI's first affirmative action officer from 1973 until 1975. She joined the Department of English at IUPUI in 1969, where she enjoyed teaching Shakespeare courses.

As affirmative action officer, Rhome was charged with establishing the new office at IUPUI. Her task was to make sure the campus was in compliance with federal equal rights legislation, and to remedy any infractions. One of her first tasks was to oversee a committee that studied salary disparity between male and female employees. Rhome's committee found that women, on average, earned $6000 less per year than their male counterparts. Rhome created a 5-year plan to correct this inequity. She also created the campus's first hearing system for affirmative action complaints. Rhome was dedicated to improving conditions for women and minorities at IUPUI, and in order to better understand the laws governing affirmative action, she enrolled in law school courses at Indiana University School of Law - Indianapolis.

In 1975, IU President John Ryan namedRhome system-wide affirmative action officer. Rhome left Indianapolis for Bloomington, where she oversaw the system-wide office of affirmative action and continued to teach English courses. Rhome was a local civic activist, and even led some efforts at a national level. In the 1980s, Rhome served as chair of the National Mid-Life and Older Women's Task Force. Rhome retired in 1986. She died March 16, 2008.